A(biased) view of the North 1 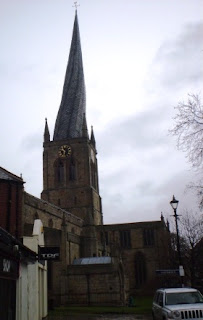 There used to be two blogs here one proto, one modelling. I'll drift a little to the proto and put Diamond Geezer/Ian Visits type posts up for a couple of days. Reason being that Mrs. F. had a meeting in Northern climes so we added a couple of days and I tagged along for the ride. One of the 009 Society Merseyside Group wrote in to 009 News reacently bemoaning the North/South divide. It's difficult to see how tongue-in-cheek this was, but every time this happens I shake my head and ask why? And all over the weekend this was running through my mind. I decided to form a definative view of Northern attitudes in 2.5 days and photograph a few buildings along the way. I navigated, Mrs F. drove and having worked in the area for a few years... translated. As can be seen we stayed in Chesterfield. Yes it's bent and nobody really knows why.

The first part of my casual study was eating: Chesterfield hasn't got much in the way of eateries above Yates' Wine Bar or Wetherspoons. We chose the former and watched Chesterfield on its way out on a Friday - scantily clad ladies, none less than a size 20, but then we spotted the 24 hour Greggs bakers... Weatherspoons curries, 24 hour bakers, and beer at less than £2 a pint. Unfortunately my first (biased) opinion confirmed. Life is easy up North: Cheap beer, cheap food and big women. But is this the North?

The locals say it is,but the local airport is East Midlands... so where does the 'North' really start? A friend of mine (Berwick born, Glasgow bred) says York is in the Midlands and if you look at the map he maybe right, but would you really stand in a pub in Sheffield and say that?

Saturday it rained for a while, but we pushed out to Matlock. I hadn't been there for a while, but I was glad that I'd taken photos of the station back then as they've dumped a Sainsburys and a by-pass on the site. The ticket machine that would tell us how much it would cost to get to Derby was out of order, so we went into Bill Hudson Books on the station which is well worth a visit. As is Matlock Bath, home of Slaters Plasticard and just on the right side of twee. The weather now cleared so I could let Mrs F off the lead to play on the swings. 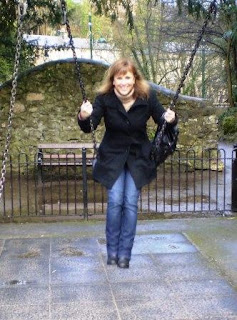 I'm in bridge -building mode at the moment so took a few photos. The photo below: the creep under the M.Bath-Matlock line. Then on to Bakewell (stopping for the compulsory pudding not tart - I'd learnt that one a few years ago) then to Buxton where the snow came down so quickly that we legged it back to the digs in Chesterfield before we got trapped at the wrong end of the A6. The second part of my study, travel: weather aside the roads are wide, well made and largely empty.
Saturday's conclusion: I like the North.
Next Notts. 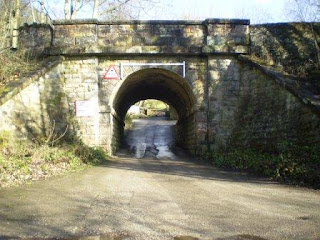