Sunday morning saw us heading East where the buildings changed character - it's as if builders reached the future M1 line and couldn't be arsed to move stone past that point; its like walking into another room. After skirting Mansfield we headed toward Southwell for no other reason than it it John Sutton's long term 3mm layout - which of course it isn't. This was a case where ignorance is bliss; I knew nothing about the place, but driving in spotted 'Station Rd'. The line went in the sixties, but like the Havant-Hayling line is now a green lane. The station building however still stands (below) and is now a private house with a blue plaque. If this wasn't enough, the pub next door has gone right over the top with a faux station in the courtyard with stacks of random railway memorabilia. We didn't go in. 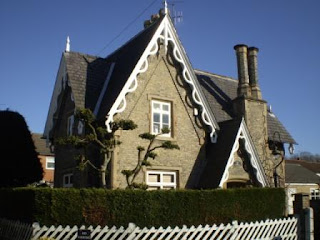 Southwell was a bit of a surprise. A very monied genteel feel with a huge workhouse which was shut on Sundays and and equally huge Minster which wasn't. This complete with ruined abbey and ongoing choir practice. The Minster built by the diocese of York... why here though? The workhouse was apparently open until the 1990's (!) for 'single mothers' - no stigma there then. Southwell is worth an afternoon's visit, but left questions hanging which neither of us could get to the bottom of, and this still didn't answer whether this was the North or not. I used to work with two girls: one from Newark just up the road and one from Gainsborough. The former described herself as a 'northerner', the later reeled back at the thought. That sounds OK until you realise the Gainsborough is twenty miles north of Newark... puzzled? Me too.

If Southwell is the genteel end then Mansfield is well... slightly less so. Combining Mrs F's local knowledge and a street map we entered coal country. Railways and coal are inextricably linked so I have always has an underlying interest in the industry. We found Welbeck Colliery which remarkably stayed open until 2010 and was demolished last year. (There is youtube footage from me and plenty on the demolition) I took a photo and some film before the security guy appeared. For some reason the building shown has been left standing - possibly the electrical equipment? There is plenty on the web about this site and Warsop Vale which stood a mile away, so google away. 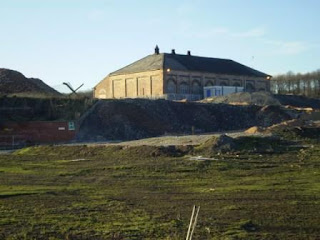 Mrs. F's meeting on Monday morning was on the outskirts of Mansfield (coincidentally on another defunct colliery site Mansfield Main) so after an exciting evening in a Travelodge(!) she went off booted and suited and I walked into town to explore.

The first place I head for in any town is the museum/art gallery - it will give you a general feel and some ideas about where to go. I'm very sorry but Mansfield museum is shite. After visiting South Wales a while back and seeing how they celebrate their heritage in style, this was truly rubbish. Walking in was hopeful - lots of 6x2 display boards titled 'Coal' and 'industry' etc. And... that was it. The rooms proper were very primary colours based and aimed at schools - fair enough, but the exhibits seemed to consist of two collections. One of Georgian prints and another of stuffed birds. Not a Davey lamp, not a helmet not even some shoes (leather work being the other main industry). I was out in five minutes. When the mine I had visited the day before only closed 18 months before there is no excuse for not having any artifacts. Where was the shop dummy dressed as a miner, the recordings of people speaking about their work? Can't you find them... they're in the pub across the street for goodness sake?
Mansfield does however have an outstanding viaduct marching straight through the center of town which just screams 'coal money' and 'power'. 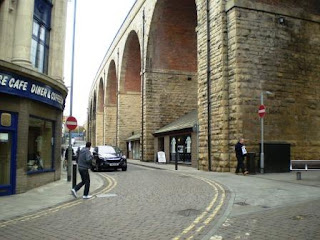 Did I come to a conclusion? Not really. Where is the North? I don't know. For something to exist it has to have boundaries... edges, and I've yet to find the edge of the North. Geographically it's probably a curving line that runs not below the M4 and not above Northhampton, but that would upset the Brummies. I'll stick my neck out and say that it's a class thing, an attitude not a place. Walking round Southwell you could have mistaken your location as home counties, in Mansfield I expected to be given the 'soft southerner' abuse that Mrs. F. used to get all the time here. 'We're from the North, we're worse off and we're going to have a go at you about it'. When in fact the reverse is true. The roads are wide and clean, the beer is cheap and the property is almost half the price that I would have to pay down here. And if you argue about social problems, then have a trip round bits of Kent or South London estates and you may withdraw that. Get rid of the chip and present what you have as the marvelous area that it is rich in history and countryside. And sort the bloody museum out. 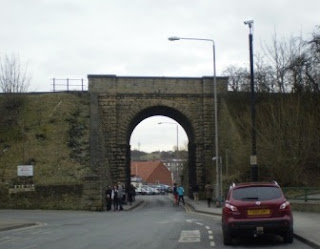