The 4mm light railway is a subject that I've had a bash at before (see Froxington in the sidebar) and it didn't really work. However this Twickenham MRC layout was at the East Grinstead show a few weeks ago and proved to me that not only could it work in a small (sub 4') space, but it could be done with PECO track.
It was pointed out that something similar could be done at least stock wise from what is in the cupboard. Goods stock is a mix of kits and RTR, the coach a re-roofed Triang and the loco the obvious Terrier. 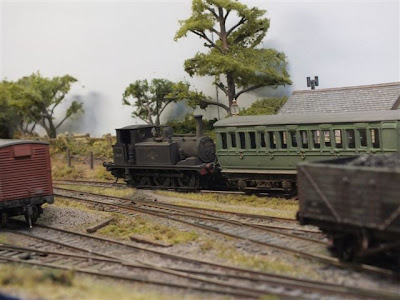 Which brings me to a question. When the Dapol Terrier was launched in 1989 (yes that long ago) I expected a rush of light railways and Haying influenced models - it didn't happen. Why? It's such a logical small space idea and perfect for the builder of esoteric wagonry.
Posted by Chris Ford at 09:30