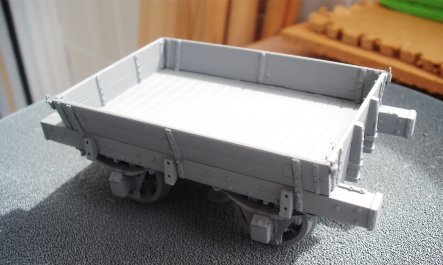 Yesterday was a bit of a mixed bag. I hit 48, which was bad enough, but added to that Laurie's funeral in the morning and the fact that I seemed to have been struck down with some sort of sleeping sickness - I just can't seem to keep my eyes open.

Nigel rolled up in the afternoon with his latest build, a Ragstone Models GER ballast wagon. This is what may be called a rather advanced piece for the planned Gauge O pre-1860 project. We had anticipated having to scratch-build absolutely everything for it, but this appeared on Roxey's stand at Epsom and looked well within period even though the instructions stated an 1870s build which in terms of this project could be termed modern image. However it does look the part and being whitemetal weighs a ton. After a little rolling up and down the dining table it was rushed outside on the cake stand and given a couple of coats of primer.
Posted by Chris Ford at 14:11