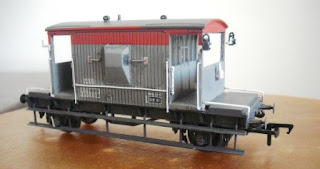 There has been a lot of discussion about brake vans during the life of Rhiw, none of which has really resolved the issue. This being, would a brake be required at any time on vac/air stock in the 80's and if so why? The closest that it's come to a definitive answer was Steve Flint handing me a photocopy of the last page of a Santona book that he co-wrote which details situations in which there might be a need for a brake. one of these post 'Driver only Operation' was 'local propelling' which may cover some of the moves on Rhiw. So at the Luton show earlier in the year I picked up a Bachmann late example... OK I guessed. Then I could find no pictorial reference for this livery i.e. Railfreight flame and grey. Paul Barlett came to the rescue again,

Almost the same except that the balcony ends are grey, not as Bachmann have painted them in red.
So a repaint for these, heavy wethering on the u/f and not much topside, plus three Spingside lamps courtesy of Nigel's bits stash. The one jarring fault is that all these vans had roller boxes (even the Airfix gives these). Despite a detailed topside Bachmann goes for oil boxes.
Posted by Chris Ford at 15:08