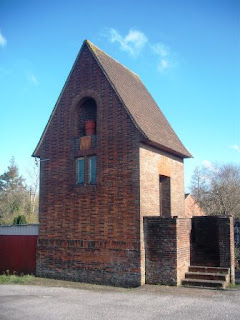 On the way back from NGSW and on the way to Sunday lunch at a secret location in Wiltshire this brick shed caught my eye, so much so that I turned round, parked up and took photos. I'm guessing  that as the floor is raised, that it maybe some sort of feed store. Being that it was on the approach track to a farm would make this probable, however how much of it is original is open to question. The footprint to height ratio makes it an ideal prototype for a non-railway building to use as a view -block.  Can anyone explain the style , use, or indeed the window shapes? 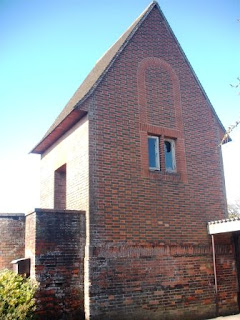 Further to the above: It would seem that the general opinion both here and via email that the structure is ornamental. With that I tend to agree, but I'm wondering if it is a two stage build; the floor being older, and above that a later upper structure added using the interesting bond and window shapes. Which still doesn't answer... why?
The building stands on the west approach to Devizes on the A361 at Caen Hill should you wish to google.
https://maps.google.co.uk/maps?hl=en&q=caen+hill+locks+devizes&ie=UTF-8&ei=ZvwlUZirGYaP0AWFkIDADw&ved=0CAgQ_AUoAg