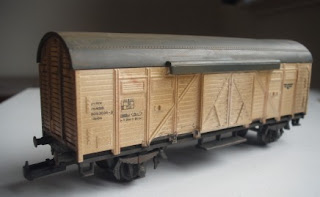 Norwegian vans
To my left under the desk were two Norwegian vans that needed finishing. This is the first. It was handed to me with a small apology - it's not really up to standard.
It's made by Lima, probably 1980s production and is somewhat below current moulding levels. On top of that it came with a 'factory applied weathering finish... oh dear. This was a major problem -  I had to weather a pre-weathered van, what should be fairly bright white wood is covered in what I can only describe as turd brown paint. If it were British I could have re-painted and re-lettered, but I have no idea if NSB lettering is available and if if is, it's probably the same cost as a terraced house in Bolton.

The underframe was straight forward with the usual gunk of German Grey and oxide colours. The top half with a little dry brushed ruts and a wash of GG on the ends with a lot of finger rubbing.

The problem with 'factory applied dirt is that it's in the wrong place - dirt collects under things. In the main the sides get washed with rain. This was also sprayed at an angle so there are white lines behind body strapping where the paint flow has been stopped. Not the best effort.