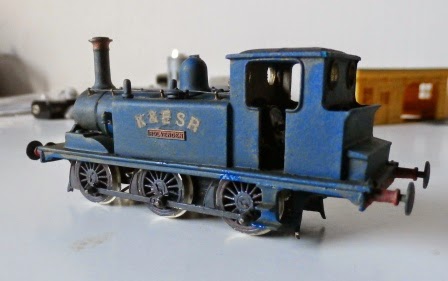 ...on a Saturday for a change.
For me 2014 is drawing to a close, primarily due to the intense work schedule that wipes out December, I disappear at the end of November and re-emerge caterpillar-like in the first week of the new year. 2015 will be different; things are changing. I/we have done some eight shows this year; that ain't going to happen again; it can't. There are three layouts currently on the books: Svanda, Tal-coed and the embryonic Morton Stanley. Two of those are really only one day beasts, but more than that I'm tiring of the pure public show mentality; much better are the open-day type where there are a few like minded individuals to chat to and exchange ideas with rather than those events where I feel like I am train-operator-monkey shuffling my stuff up and down for people who quite frankly a lot of the time are just keeping out of the rain and couldn't give a toss.
There are essentially two more layouts on the 'five year plan': the GWR terminus and the O gauge which could go one of two ways. These will probably stay, but being that they are pretty much set as exhibition games, there is a feeling of relaxed in-urgency about them. They'll get done when the sap rises. So where does that leave me? Well I did have an idea to pack it in for a while and go back to being a rent boy, but I'm told I'm too old now so I may build a home layout instead. But what? and why?
There are lots of possibles: 009 is the most logical, it's home base and I have a lot of it in stock, but then to some extent it's another 009 layout for me, and I've had my fill over the last couple of years. What is rising to the top is something either industrial or light in 4mm. One of my favourite things is 4mm wagon-building and I do very little of it these days despite there being an unlimited  supply of cheap available supplies. Another factor is the liking for the Kent and East Sussex Railway. The prototype is around the corner and I have bits enough to start, like the above which I built ages ago from a part-built K's kit and a Branchlines chassis. There is another kit in stock and an LSWR 0330 saddle tank - all suitable stuff. It would be possible to wrap 2/3 stations around the room that I'm sitting in. As Paul Marshal-Potter put it in a recent post of his ' ...a railway that goes somewhere.' So in order to feel my way, in the Terrier arrived on the desk -  a little worse for wear: chipped paint, no crew and the ironwork around the dome to rebuild. The transfers are rub-downs from Mabex, now long gone. Are there newer replacements?