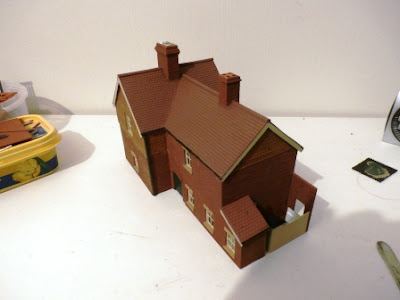 I really don't know how Mr. Robinson does this all the time. I managed to get some more painting done and the gents toilets finished and installed. This initially caused a bit of headscratching as I couldn't find the bits for them, and then realised that I didn't need some of them anyway as it's not a stand alone piece. Constructional-wise it's just the porch to go and to pop the chimney pots on.

Don't forget the new series of The Detectorists tonight at 10pm. The last series was hilarious and is the closest thing you'll get to a model railway club sitcom. The parallels are many. I sit there laughing out loud, which is unusual and Mrs. F. rolls her eyes and makes Dandy Nicholls type comments. If you've been in a club then you'll recognise everyone here.
Posted by Chris Ford at 09:48