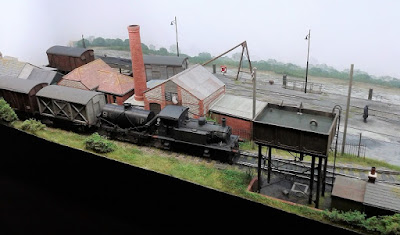 A couple of snaps taken with my phone of Gordon Gravett's Arun Quay at the Uckfield show. This is rather inspirational for a least two reasons: firstly the utterly superb modelling which just does not get any better than this. Second, the fact that, like Ditchling Green, this is very much based on my patch. The Gravetts live in the west country, but oddly the modelling doesn't reflect this, and this being the second layout based in Sussex, the roots are surely hard to shake off. 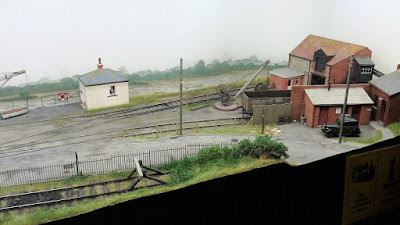 This also digs straight into my thoughts of late regarding 'connection'. Try as I might I'm finding it very hard to get to grips with designing a possible American layout; it might yet happen, but I think this problem could be that I don't feel connected in any way to it as my only experience of it is though various media and not the real thing. So why is it that I'm usually known for narrow gauge modelling when they're a bit thin on the ground around here? Probably the repeated trips to North Wales and having a very good museum with a NG line. Arun Quay however hits the spot as I don't have to go very far to bump into similar architecture and in fact was in Arundel only yesterday on the river where this layout is supposedly set.
Going up against the Gravetts would be foolhardy in the extreme, but something similar in 4mm, may just have the connection that I need.
Posted by Chris Ford at 01:46