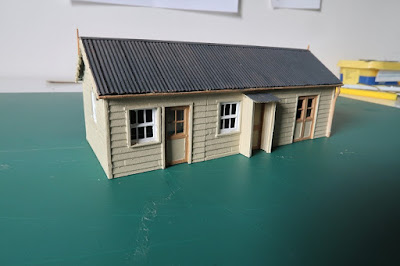 Most things have gone wrong at some point this week, mainly on the paint front. Coupled with the almost circular thinking with the new layout when all that was originally planned has fallen away to be replaced by something else, then... repeat. Half the problem is that as I've always said, once you step out of the cheap and easy road of freelancing, things become much more acute as 'that looks OK' doesn't cut it. The AotC was a generic GW branch terminus - the next project has to have more weight and substance than just making it up. Areas become important, shed allocations become important, stuff has to have some sort of explainable logic.

My preference would be S Wales. No good. Branch termini are non existent, they all end in a pit of some sort, plus they are mostly double tracked. So an accidental move to the West. Then you are up against Cambrian weight restrictions and Dukedogs, Cambrian 0-6-0's and at the outside a Dean Goods and a 48XX which I don't have. Back to Stourbridge shed area which means I can use all of the RTR things that are in stock. Once again no logical branches except the much projected Kinver both pre and post the electric light railway.

So it seems that something in the Hereford/ Hay area is likely with the Golden Valley as an influence and thus frustratingly back to Clees Hay, Mr. Hill's much loved root idea.
This was supposed to be a fairly quick project. It's proving anything but.
Posted by Chris Ford at 16:11