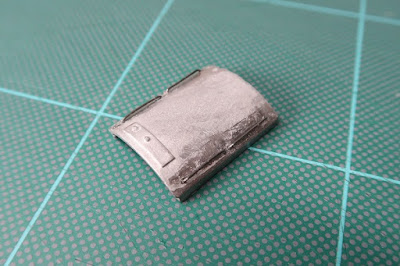 A ha, some modelling at last. After about a week of doing very little but model railways, but not actually doing any modelling, I cleared the top of the workbench and pulled over a plastic box of whitemetal bits which hopefully will morph into Conway Castle - or something like it anyway. It's about 25% done in that several of the larger lumps are already together and the footplate has been altered to take a Kato tram chassis instead of the Ibertren Cuckoo that it is intended for.

I'd not built a whitemetal kit for a couple of years and as we'd all cut our teeth on the Chivers kit range it seemed like a good place to start, seeing that this is for the next book and therefore nominally for the novice. The kits (now renamed Five 79 models) are available in dribs and drabs from Matt Chivers  and are essentially the same as the original range.

Today I spent an interesting hour trying to get the 'extra' handrails on top of the bonnet, or more to the point trying to get eight holes lined up and equal on a compound curved lump of slippery metal. I nearly made it. The rails themselves are point control wire of about half a mil diameter and are fixed with super glue - always a joy to use. There's another six to go on the sides of the bonnet plus the four around the cab doors. Most people would probably leave them off, but for me the grabs and handrails give those all important shadows on what is a fairly boxy structure.