Rhiw and the great tidy 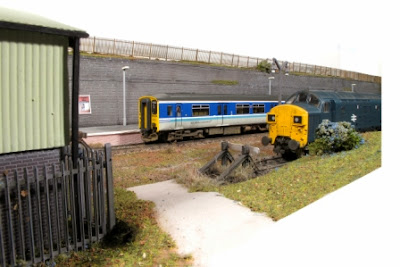 The labelling issue
In recent months a couple of people have contacted me to ask for details of Rhiw the 1980s Welsh essay. I was puzzled as almost the entire year's build is documented here. It's also the layout page button with the highest traffic, which is not surprising as it's just about the most mainstream thing on here. Fast forward to the current streamlining and tidying of the blog and I realised what the problem was - it's all very badly labelled.

The forgotten name
Toward the end of the build the name was changed to Rhiw from the original idea, but what I'd done, and then continued to do, was to label with the first name. At the time it didn't seem important, after all the page button at the top was the main entry point for it. This was wrong. The internet works in a certain way and there is no point having the information available if you make it hard to find. Therefore I'm going through the entire lot, thinning some things and making sure that all the stuff that I want to leave on here is now fully labelled. If you click on the 'Rhiw' tag at the bottom of this post you should get the entire build - in reverse order naturally. Or alternatively you can stick Rhiw into the search box at the top. This is the first layout to get the treatment and I'll gradually work through the others, though this I think may be the biggest.

I note that it's not exactly a nice logical blow-by-blow build, more a set of thought processes with accompanying photos. The nature of this or any blog is a tipping out of the brain more than an article type of structure which is all neat and tidy. It's this neat and tidy aspect which I'm hoping to improve.
Posted by Chris Ford at 02:30