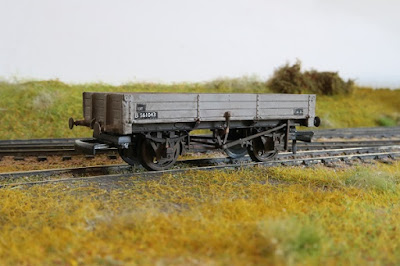 Most of what I've done this week has been small repairs on Dury's Gap stock. Here a case in point. On opening the box I discovered that both couplings had mysteriously  dropped off this SR wagon, as had one door retainer. Why, in a closed box?

The couplings are the obvious tension locks. Post Art of Compromise I've started to standardise on slim Bachmann hooks at one end, and one of the slightly wider versions at the other - either Dapol, Bachmann or some recently discovered 'pack A' examples from the Replica stand at shows; which are dirt cheap as well. The single end-ing means they don't lock on curves, the wider female means the hook has plenty of space to slide around and doesn't ping the wagon off the track on a reverse curve. Singling make them easier to uncouple and the hooks don't tangle. On Rhiw I used ramps, but since then I tend to hand uncouple with a 'plate on a stick'.

This wagon was a conversion I did for the Southern book, a Ratio LMS 3 plank to an Ashford-built Southern example that's unlikely to get done by either the kit boys or the RTR market. Full details in that volume here:  Southern Region book