Is Loctite Control any good?

A wander out to get some glue saw me pick up some Loctite Control. In theory what this does is put exactly the right amount of glue in the right place. The material being stuck as always was brass and whitemetal. Here's what I found. 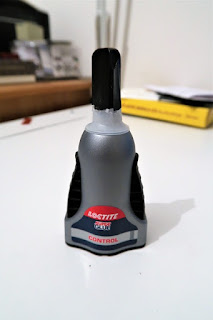 Does Loctite Control stick things?
Yes. No problem with the fixative aspect and Loctite Control is as good as any of the cheaper end and easily available super glues. Working on a non-porous surface means it tends to spread around and doesn't work as quickly as it would on something softer. This is most of the reason for not using an all purpose adhesive like UHU which needs at least a roughening of the material's surface to get a good bond. This took slightly longer to go off than I expected, and it flowed around a little more than I'd have ideally wanted.

Does the 'control' aspect work?
It depends how much you want. It's essentially a pump and there is a tendency for it to keep flowing. This pump method is probably OK if you are working on a reasonably large surface say a car lamp cover. For model work the 'control' aspect isn't controlled enough and I found that I reverted back to old ways a few times and dropped some onto a piece of scrap plastic and then carried it to the work with a cocktail stick.

Does it suffer with getting gummed up?
This is probably the worst part of it. I would have thought that a first principle of a strong glue is to make the cap and nozzle out of a material that it didn't bond with. Not so here. All the design cash has gone into the pump part and not into thinking about getting the cap off at usage point two. Result: the second time I used it, I had to use a pair of snipe-nosed pliers to get the cap off. OK if you've got a good toolbox to hand, not good for most people who probably haven't, meaning that it'll go straight in the bin. On an environmental level, considering the amount of plastic in the pack, this is poor.

Are the tubes of super glue better?
I usually use one of the cheaper tube versions and I think on a value and ease of usage front these are better. I don't think I've ever used a super glue from any manufacturer that doesn't dry out before the end of the tube, so providing it sticks OK, the cheaper tubes seem to be a better bet. My preference is generally a Gel version, simply because it gives you a little time to adjust things as the glue is going off, though for some reason the liquid versions give a better long term bond.

The Loctite Control isn't efficient in usage or in packaging. For small part work it's not controlled enough and unless you use the whole bottle in one sitting then it's likely to be straight in the bin in 24 hours.
Posted by Chris Ford at 10:19