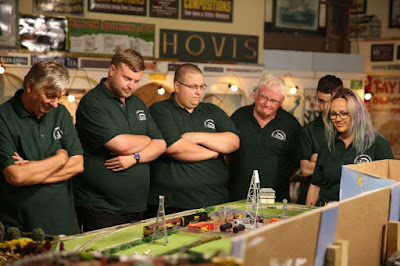 Marmite.
I was chatting to a few friends a few days ago and the Great Model Railway Challenge was brought up  - it might as well have been a discussion on Brexit, so opposing were the responses.  I'm on record as saying fairly publicly around 18 months ago when they were punting around for the Series 1 teams that I wouldn't touch it with a bargepole. My thoughts pre-broadcast was that it would be a set-up to ridicule. This didn't really come to pass though there were a couple of 'ouch'' moment in this regard. On this point specifically one thing has to be  taken into consideration: People are different. I notice this when I switch from an entertainment work setting where women especially are picked for size and attractiveness and people can speak clearly and 'to an audience'. Counter that when walking into any other work environment and you get a selection of the above. i.e. a mix of ordinary people: age, speech issues, grey hair, glasses and beer guts (me). It's not that railway modellers look any different to anyone else, but that they just don't look like hand-picked TV beautiful people and that's what we are used to seeing.

Is the show about modelling? Nearly. Most modellers would say it's not about the time it's a 'pastime' and this has no boundaries. TV forces that to an extreme as everything is about the time and it has to have entertainment value for the  non-modelling viewer. The themes tend to push the railway into the background and that's where most of the anti brigade GMRC sit on it - they may be right.

Does it work? Well I came away from series one entertained and with a feeling that this was good for the hobby as a whole - there was a noticeable number spike at exhibitions in the months following the show. More people coming in makes for cheaper and more numerous products and more successful exhibitions so there are lots of positive knock-ons. I notice that Hornby have suddenly woken up and tossed an ad' into the break in this series, whereas Peco were much quicker to realise the commercial advantage. The jury is still out for series two, and I doubt that it will run much past this with the current format. Getting railway modelling in front of a sedentary TV audience and in prime time can only be a good thing no matter about the beer guts.
Posted by Chris Ford at 10:39