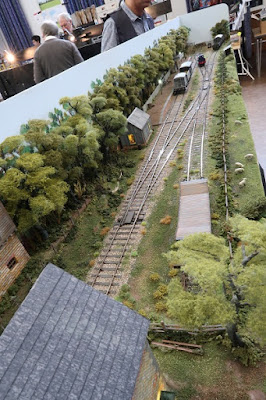 To East Grinstead with Hopwood's first real outing. One day into the weekend and a few notable things: The layout behaved itself with two invites in fairly quick order - I still have issues with the blue for some reason. Apparently the numbers for Saturday were the same as last year which suggests that most people were being sensible, taking basic hygiene precautions and carrying on as normal which, considering the average age of the room, was encouraging. The random question of the day was the Heljan railbus. I've often drooled over these and as the layout was up, I asked to try-before-buy on two occasions from two different sellers; one s/h, one brand new. The s/h one was rejected as it ran fine one way and had an alarming deep clunk going the other which suggested a gearing issue. The second, and brand new one, rather worryingly did exactly the same straight from the box. This suggests a major design/quality problem and led me to this:
https://www.rmweb.co.uk/community/index.php?/topic/98492-wm-railbus-problems/

It seems that it's not just the steamers that Heljan suffer with. Try before you buy would appear to be the watchword.

Set up next to us was Luc's new O gauge, also on its debut. Probably the best item there and looked familiar in that aside from being 50% longer, is the same Gammon End type plan that is planned for the next project. If I could do this I'd be very happy.
Posted by Chris Ford at 01:30