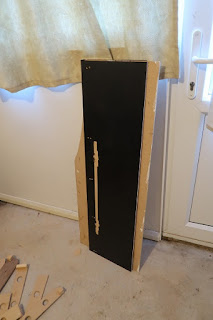 The current crisis is generating much deep thought on lots of levels for everyone; what's important and what can wait.  I suppose that railway modelling is no different and I, like a lot of people, am revaluating certain things.

I had begun a layout which was springing from the period of the GWR book (available to your right) and the AotC layout, which may still exist somewhere in Lincolnshire. The basic plotline was to look at the subject in a more 'finescaley' fashion. Me and finescale are not natural bedfellows, but some improvements could be me made by giving the idea more space and by making use of the Peco bullhead track. So far so good and the boards were built and the track went down. Then I got the request to build Hopwood and the layout was stacked neatly in a corner for a while. Then shortly after Hopwood had been shown at Warley, the O gauge project was mentioned... it remained in the corner. Now, some two-plus years later and with the room lightly flooded it ended up in the garage getting in the way.

I took it into the office and gave it a good looking at. I'd moved on. The world had moved on. Did I need another exhibition layout when there may be no exhibitions for a very long time? The answer was quite mixed: yes I do, but my head is thinking more compact and to be honest the bullhead wasn't singing to me.

The other factor was the idea that while I quite liked Hopwood as a concept, it was a little short, too wide and waaaay too heavy. Taking the basic premise and mixing that with the previous idea for Rhiw (tabs above) and looking at a Rhiw 2 which had been on the board for a while.

This is a very long winded way of saying that I stripped the boards down for materials that could be used for this. And while not a lock-down project (yawn) the materials for this are all in stock.